This is the homepage for various projects in measuring time-varying deformations with (mostly) longbase strainmeters and tiltmeters, primarily in southern California. The instruments are called ‘‘longbase’’ sensors because they produce high-quality data by measuring over distances of hundreds of meters at the surface of the Earth. Another type of strainmeter is that installed in deep boreholes; these measure over baselines of 0.1 meters or less. Support for the longbase strainmeters and tiltmeters is provided by the US Geological Survey, the Plate Boundary Observatory program (UNAVCO/NSF), the Southern California Earthquake Center, and the National Science Foundation.

If you wish to know more about these instruments, we have written a (very) detailed review describing how they work and some of the results we have obtained from them. This is about a 4.5 Mb PDF file, with lots of color plots, and is written for our fellow scientists, not for the layman.

This magnitude 7.2 event has been followed by postseismic strain changes (for detailed plots), some of which are probably caused by afterslip on the fault that ruptured, and other which suggest triggered slip on other faults.

We are involved in operating sensors of this type at six different sites, four of which are shown on the first map, which also plots the location of continuous GPS sites installed before and during the PBO, and of borehole strainmeters operated by the US Geological Survey and the PBO. 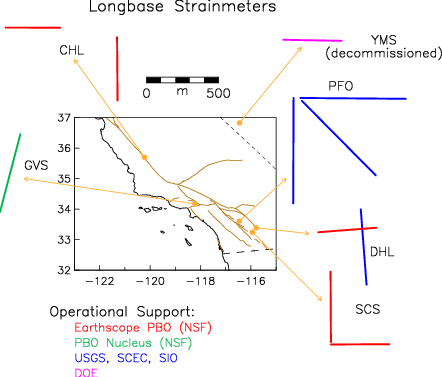 Via the HPWREN wireless research network, which provides high-quality Internet access to the remote strainmeter sites, and the Anza Project’s ROADNet/Waveform Explorer program, which handles real-time data, we are able both to keep a close watch on the recordings (critical to rapid response to events, and to data quality), and to make available plots of recent 1-Hz data from all systems in near-real-time.
Making use of the ROADNet/Waveform Explorer website, the near real-time strainmeter recordings are available, (say) for the PFO longbase strainmeters, by requesting Channel  3  : Station  PFO4  for the NS strain, PFO5  for EW strain, and PFO6  for NW-SW strain. Similarly for the other sites, enter CHL1, CHL2, DHL1, DHL2, GVS1, SCS1, SCS2. (Series can be plotted in parallel using the pipe symbol: e.g., CHL1|CHL2.)

Note that all these channels show uncorrected strain, which should not be used for research purposes.

All data from the PBO-supported instruments (GVS1, DHL2, SCS1, SCS2, CHL1, and CHL2) as well as that from the earlier installations (PFO4, PFO5, PFO6, and DHL1) are available at the PBO strain data archive at the NCEDC; for questions about the file formats, see the PBO documentation.

Longer-term data from the PFO and DHL strainmeters are available from when we installed our new datalogger/telemetry setup at each site. We make available files of "Level 2" data (fully processed) in PBO XML format here for DHL and here for PFO.

Data from the presently mothballed YMS strainmeter are available at the Technical Data Archive of the Harry Reid Center, University of Nevada (scroll down to Task ORD-FY04-008).

For older strainmeter data from GVS, PFO, or DHL, or other data from these facilities, please contact fwyatt at-sign ucsd dotsign edu.

We have a suite of programs available for working with strainmeter data; essentially, the ones we use ourselves, which we call PIASD (Programs for the Interactive Analysis of Strainmeter Data). They are well-documented, and should port to any Unix or Linux system.

We have also applied some of the lessons learned in strainmeter measurements to improving the quality of GPS measurements, in two ways:

We are developing a page discussing different designs for geodetic monuments; additional links are always welcome.

The Black Forest Observatory in Germany is another location with strainmeters and tiltmeters (shorter-base, in an abandoned mine).

The Plate Boundary Observatory is the project installing GPS and strainmeters along the boundary between the Pacific and North American plates.